Help the Earth this year with your New Year’s resolutions. Small changes can make a big difference when it comes to being eco-friendly. Why not pick an eco-friendly resolution that can help you reduce your carbon footprint and make the world a better place?

It isn’t realistic to adopt all of these lifestyle changes. Instead, pick one or two resolutions from this list.  No one is expecting you to be a perfect environmentalist, but it can’t hurt to try your best with a few of these eco-friendly resolutions.

Why do we need eco-friendly new year's resolutions?

If you’re an environmentalist or just been following along with Greta Thunberg on the news, then you know that our home is in trouble. The Intergovernmental Panel on Climate Change (IPCC) has reported that if we don’t vastly reduce our greenhouse gas emissions by 2030 then our Earth will reach a point where we can’t fix it. Scientists agree that this could result in mass extinctions, sea levels rising, and terrible storms. All of this could devastate our food supply and our homes.

Don’t get too bummed out!

Rest assured that you can make a difference.

Lifestyle changes can go a long way towards mitigating the effects of climate change. Check out these eco-friendly New Year’s resolutions that can help you reduce your carbon footprint.

1. Educate yourself on the climate crisis

If you don’t understand the state of our climate, then it’s time to educate yourself!

This article from National Geographic explains it very well.

Basically, you need to know that current pledges from world leaders to cut CO2 emissions would have our post industrial Earth warming to at least 5.4 degrees Celsius by 2100. Scientists say that we need to limit our warming to 1.5 degrees Celsius in order to avoid potential catastrophes in our ecosystem.

To put things in perspective, we are already at an increase of 0.9 degrees Celsius.

Let your political leaders know that you are worried about the current state of our climate.

You can’t change things by being silent. Write to your law makers and let them know that you support clean energy and efforts to reduce our greenhouse gas emissions.

If you don’t know how to contact your lawmakers, go here.

Scientists estimate that landfills produce 14-18% of methane emissions. Methane is a greenhouse gas that is 20% more potent than CO2.  If you reduce the waste you send to a landfill you can easily reduce your carbon footprint.

Want to learn more about how to compost? Start here: How to Compost

This goes hand in hand with composting.

Composting is a great way to reduce the food we send to a landfill, but reducing what you waste is key too. Even if you compost already, wasting less can help the environment.

Energy is used to produce and deliver food. Delivering food to the grocery store or farmer’s market requires a lot of greenhouse gasses. When you waste food, you waste the energy it took to make the food as well as contribute to methane emissions in landfills.

Head here to get 8 tips for decreasing your food waste.

We all know that plants absorb carbon dioxide to make oxygen. Plant a few and you’ll feel like you are doing a little something to help offset your carbon emissions.

If you have the space to plant a vegetable garden, do that too. Planting food you can eat is a great way to reduce your carbon footprint since no CO2 was used to deliver food to a store.

If you live in an urban area, it’s even more important to garden. Cities tend to be hotter than surrounding areas because of the pavement. Planting a balcony garden is a wonderful way to mitigate this effect by cooling the area.

This is a hard one for most people. Single use plastics are all around us in the form of straws, plastic baggies, grocery bags, and drink containers.

While it may be hard, this fact might help you change your thinking: every single piece of plastic ever made is still hanging out somewhere. Plastic doesn’t truly biodegrade. When it does break down it doesn’t go away. Plastic breaks down into micro plastics that make their way into our water ways and food.

This is a much easier eco-friendly New Year’s resolution! If ditching all single use plastics is too much for you, start small with the straw.

Straws are one of many single use plastics that contribute to litter and pollution. Every year we use enough straws to wrap around the Earth 2.5 times! Plastic straws are among the top 5 items collected on the beach every year. Since plastic never fully breaks down these little plastic particles are ingested by fish and moved through the food chain.

8. Commit to at least one reusable product

Ditching all single use plastics is a great idea, but easier said than done. After you ditch the straw, commit to using at least one other reusable product.

You can use a reusable water bottle, coffee mug, sandwich bag, shopping bag, or all four!

Click below to shop some of our favorite reusable products.

What is a zero waste kit?

It’s a collection of reusable items that you carry with you in order to reduce your garbage. Here are a few common items used in a zero waste kit:

Store everything in a reusable bag. I like to carry my smaller items in my purse and keep the larger items in the trunk of my car.

Here are a few easy ways to eat local:

11. Cut down on meat and dairy

Livestock farming has a large environmental footprint.  It produces nearly 18% of the man made greenhouse gas emissions.

What if you aren’t down with a vegetarian or vegan diet?

There is no need to cut out meat and dairy for good. Here are a few tips to help you reduce your consumption:

Carbon emissions from cars are a big part of our problem. Why now help out by biking or walking instead.

You’ll get a workout in as a bonus!

13. Carpool when you do drive

Are you heading to the same place as a few of your friends?

You save money on gas too.

Shopping for used products first is a great way to help the environment.

A lot of water and chemicals go into producing new items, especially clothing. Just by buying something used instead of new you are promoting recycling and cutting down on waste.

Donating old items is just as important as buying used ones. Don’t send your old stuff to a landfill when someone else could use it.

Better yet, buy less stuff to begin with!

Not only do LED bulbs last longer, they use less energy and are easily recycled!

Did you know you could recycle those bulbs?

You can contact your local recycling center or drop them off at Lowes and Home Depot.

16. Cut back on air travel- book a staycation

Overall, air travel only accounts for 2.5% of carbon emissions. Flying commercially is a far better travel option than driving across the country.

That being said, it’s still something that could be done better. If you are really concerned about your carbon footprint, try flying and driving less. Book a staycation in your hometown instead!

17. Bring your own Takeout containers

This goes hand in hand with the zero-waste kit explained earlier in this post.

If you can’t commit to an entire zero waste kit, try carrying a few reusable takeout containers with you when you dine out. This is an easy way to cut down on plastic and styrofoam consumption. Plus, your waitress will love not having to do an extra chore for you!

Solar power systems derive clean energy from the sun allowing for less dependence of fossil fuels. Coal, natural gas and nuclear energy all require water while solar requires none at all.

An added bonus os solar panels is that you save money on electicity. If you live in a particularly sunny area you could even cut out your electricity bill all together!

19. Unplug Electronics when not in use

All electronics drain energy when plugged into an outlet. This is called vampire energy. Not only are you wasting resources to create that energy, you are wasting money.

If you charge a lot of electronics, try plugging them all into the same power strip and turn off the power strip when not in use.

It’s been said that the single biggest thing you can do for the environment is to go vegan.

Personally, we are okay with reducing waste and composting, but since veganism is considered the best thing to do, we had to include it!

An article from Bustle in 2016 reported this fact:

According to Environmental Defense, if every American skipped one meal of chicken per week and substituted vegetarian foods instead, the carbon dioxide savings would be equivalent to taking more than half a million cars off of our roads. If everyone ate vegetarian one day a week, we’d also save 100 billion gallons of water (aka enough to supply all the homes in New England for almost four months); 1.5 billion pounds of crops otherwise fed to livestock (enough to feed the state of New Mexico for more than a year); and 70 million gallons of gas (enough to fuel all the cars of Canada and Mexico combined and then some).

And that is just the effect of one day.

Read the rest of the article here.

These 20 eco-friendly resolutions can go a long way towards making a positive impact on our Earth. Just imagine if everyone picked only one of these resolutions?

Better yet, what if we all made an effort to do half of them? Or all of them?

We aren’t suggesting that everyone become a zero waste vegan. That’s a little much for most of us.

Instead, we hope that you pick a few of these eco-friendly habits to adopt in the new year. We can’t make the world a better place unless we do our best. 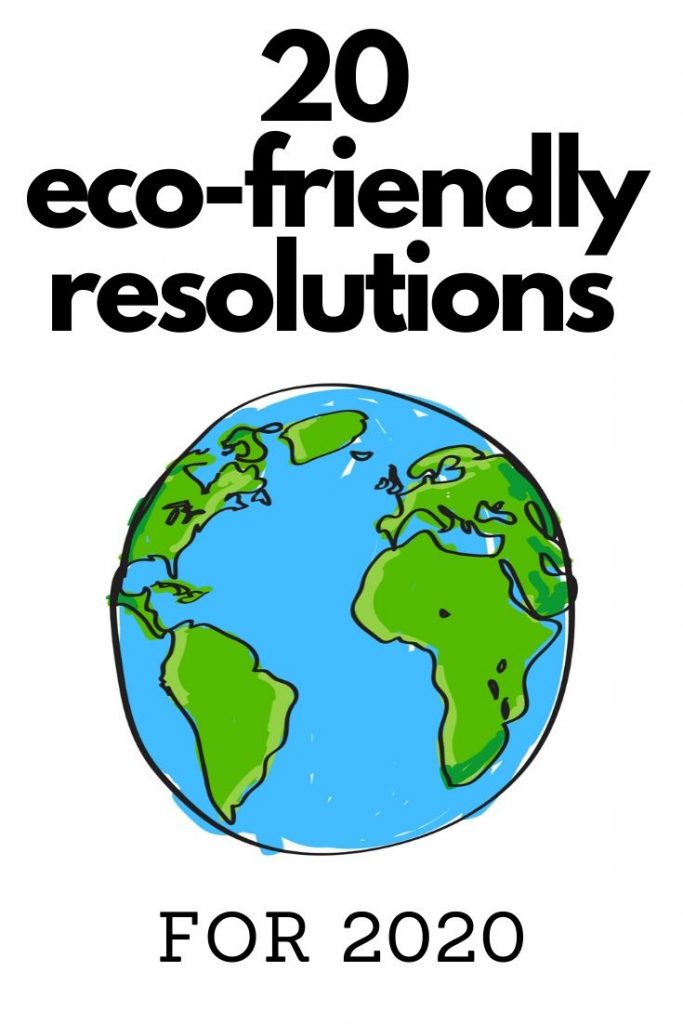